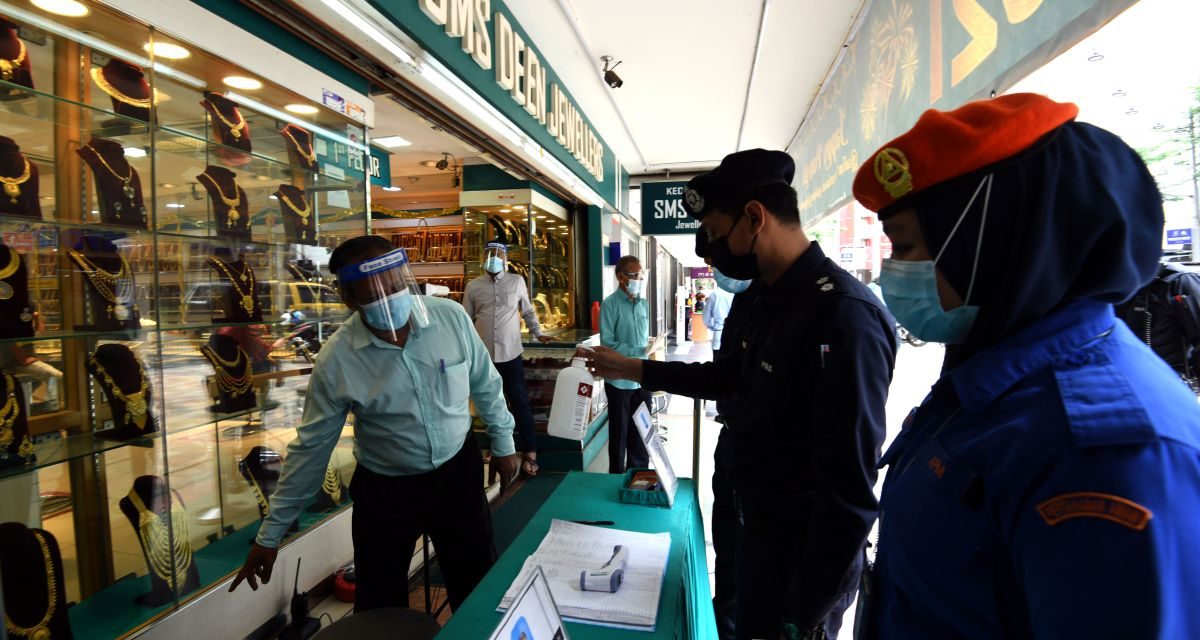 SOP VIOLATIONS IN THREE CATEGORIES BASED ON SEVERITY
The offences under Act 342 (Prevention and Control of Infectious Diseases) will be classified into three categories based on severity of the violation. Fines for violating Covid-19 SOP have been detailed in guidelines which will be made public, following confusion over the maximum RM10,000 compound. Datuk Seri Takiyuddin Hassan said the most severe offences (Category One) are those that involve high transmission risk of the virus, and that leads to large-scale impact to the community. This would include violations such as entering a pub or nightclub. Individuals will be slapped with the maximum fine of RM10,000 while companies that open a pub or nightclub will face a maximum fine of RM50,000. Category Two violations are defined as offences that involve high transmission risk of the virus, but would not lead to a wide-scale impact to the community. These include entering an enhanced movement control area without permission, or refusal to give information concerning the prevention of Covid-19. Category Three violations include failure to wear masks, failure to record personal details before entering premises, failure to maintain physical distancing. Those who commit such offences will face a RM1,500 fine, while premises owners operating beyond the allowed hours may be slapped with a RM10,000 fine. Takiyuddin said the document containing the full list of the offences will be made public online soon. (The Star)

KL LANDOWNERS OWE NEARLY RM20M IN QUIT RENT AS OF DEC 2020
The arrears in quit rent by landowners in the Federal Territory of Kuala Lumpur as at December 31, 2020, amounted to RM19,584,478.00 and involved 5,727 titles, said the Federal Territory Land and Mines director Datuk Muhammad Yasir Yahya. He said based on records, there were 165,371 registered land titles in Kuala Lumpur in early 2020, with 16% of them having quit rent arrears amounting to RM28,809,508.30. He said various efforts were made by the Federal Territory Land and Mines Office to reduce the amount of the arrears, including initiatives to facilitate landowners to pay their quit via online payment (FPX) and cash payment at the Post Office and DBKL Counters. Meanwhile, Muhammad Yasir said failure by the landowners in settling their quit rent arrears could impede any transactions involving the property. The greater risk, he said, is the landowners facing forfeiture of the property by the government. Since the establishment of the Federal Territory of Kuala Lumpur in 1974, the quit rent has been revised four times, in 1975, 1984, 1994 and 2006. (Malay Mail)

PHASE ONE OF RM176M GURNEY WHARF OPEN TO PUBLIC NEXT YEAR
Phase One of the RM176 million Gurney Wharf project is expected to be completed in the first half of 2022, Penang state exco Jagdeep Singh Deo said. The Penang housing, local government and town and country planning committee chairman said phase one of the public park will be ready in about a year’s time and open tender for the public park will be called by June this year. “The project is expected to start by the third quarter of this year,” he said. He said almost 50 acres of the 131 acres will be turned into a public park complete with public facilities and amenities for the disabled. Jagdeep said phase one of the park project will include landscaping, a skate park, a promenade, a children’s playground and kiosks selling snacks and souvenirs. Water taxis facility from Gurney Wharf is also under the planning stage. The Gurney Wharf project is a seafront public park located on part of the 131.09 acres of reclaimed land off Gurney Drive. (Malay Mail)

ZAFRUL: MALAYSIA’S 2021 STATUTORY DEBT EXPECTED TO REACH 58.5% OF GDP
Finance Minister Tengku Datuk Seri Zafrul Abdul Aziz said Malaysia’s statutory debt is expected to hit 58.5% of GDP in 2021 due to the implementation of the RM20 billion PEMERKASA stimulus package to safeguard the nation’s economic growth from the impact of the Covid-19 pandemic. Zafrul said that as of February this year, the nation’s statutory debt stood at 54% of GDP. “The forecast 58.5% figure is still under the 60% statutory debt limit and the absolute number of government debt is expected to reach RM975 billion,” he said. “Statutory debt has three instruments which include Malaysian Government Securities (MGS), Malaysian Government Investment Issue (MGII) and Malaysian Islamic Treasury Bills (MITB),” he said. “The RM11 billion fiscal injection from PEMERKASA will result in the nation recording a higher budget deficit this year, but we intend to fully maximise (the use of) the Covid-19 fund approved by the Parliament accordingly,” he added. Yesterday, Prime Minister Tan Sri Muhyiddin Yassin said the government would roll out RM20 billion worth of stimulus packages, including an RM11 billion fiscal injection. (The Edge)

NORTH KOREA BREAKS DIPLOMATIC TIES WITH MALAYSIA
Pyongyang announced Friday that it broke diplomatic ties with Malaysia after the country extradited a North Korean citizen to the United States, in a foreign ministry statement carried on state news wire KCNA. The statement described the unnamed individual as someone engaged in “legitimate external trade activities in Singapore,” insisting that it was a “fabrication… to argue that he was involved in ‘illegal money laundering’.” On March 3, a North Korean man named Mun Chol Myong lost his final appeal in Malaysia’s top court against extradition to the United States to face money laundering charges. Mun, who had lived in the Southeast Asian country for a decade with his family, was arrested in 2019 following the extradition request from Washington. It is unclear what Mun is accused of supplying, but there have been cases of businesses in Singapore sending luxury items, such as liquor and watches, to North Korea. The export to North Korea of some luxury goods are banned. (NST Online)