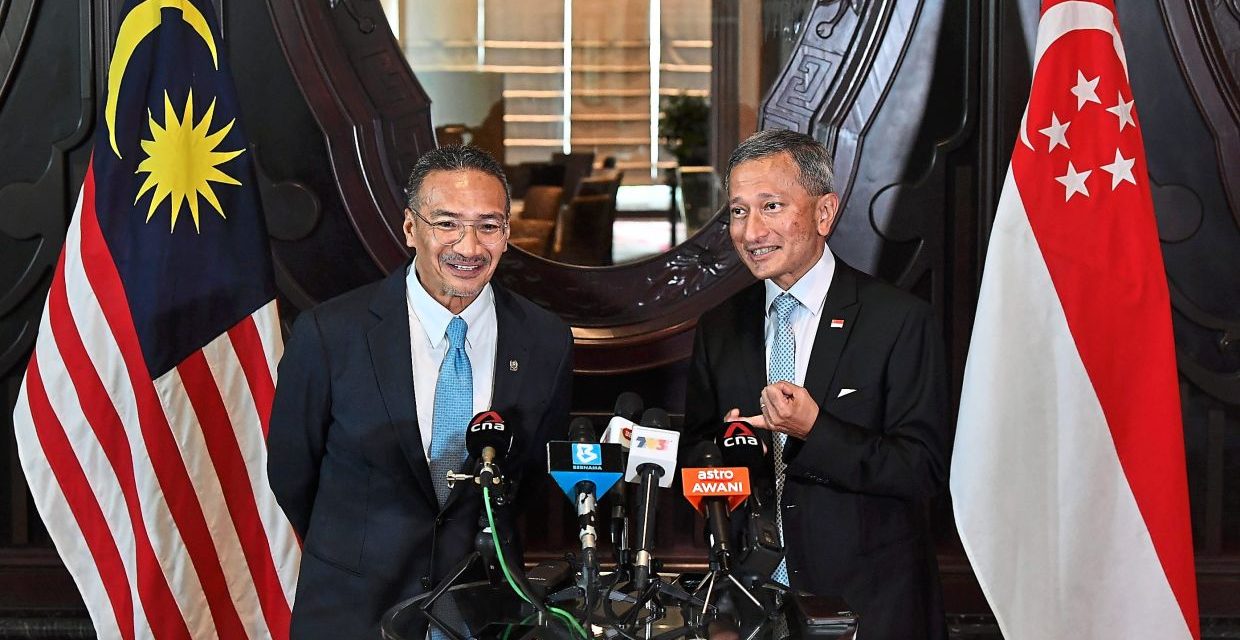 MALAYSIA AND SINGAPORE COMMITTED TO RESTORE CROSS-BORDER SAFE TRAVEL
Malaysia and Singapore reaffirmed their commitment to recognise each other’s Covid-19 vaccination certification to facilitate future cross-border travel between both countries. This was among decisions reached after a bilateral meeting between Foreign Minister Datuk Seri Hishammuddin Hussein and his Singaporean counterpart Dr Vivian Balakrishnan in Putrajaya. In a joint statement, both ministers said the operational details of the Reciprocal Recognition of Vaccine Certificate between Malaysia and Singapore will be further deliberated and finalised. The details included health protocols and application processes involved for entry and exit into Malaysia and Singapore. Hishammuddin and Dr Balakrishnan also reaffirmed the commitment by both countries to continue making progress on their respective national vaccination programmes to vaccinate long-term residents, including Malaysians in Singapore and vice versa. (NST Online)

IGB TO UNVEIL PROJECTS IN KUNDANG AND SOUTHPOINT BY 2H2021
IGB Bhd, through its wholly-owned subsidiary Tan & Tan Developments Bhd, plans to launch a project at its Kundang township in Gombak and one at its Southpoint development in Mid Valley City in 2Q2021 and 3Q2021 respectively. D’Laman Kundang has a GDV of RM80 million. Located on a 6.5-acre parcel, the freehold development with individual titles will comprise 179 two-storey link houses. Meanwhile, the group’s final development in Mid Valley City — known as Southpoint Residences — has a GDV of RM400 million and will comprise 172 apartment units. “Homeowners and investors have a chance to own a unit in the last development at Mid Valley City. Spaces have been designed to allow greater flexible living in a high-security development, with unparalleled views of the KL skyline,” says Colin Ng, chief marketing officer of Tan & Tan. Tan & Tan was founded in 1971 and its developments include Co-Living @ Damai Residence, Stonor 3 KLCC, Park Manor and Sierramas Heights. (The Edge)

SELANGOR MARITIME GATEWAY INITIATIVE TO RAKE IN MORE THAN RM1BIL INVESTMENTS BY 2030
The Selangor Maritime Gateway (SMG) initiative, which aims to transform the Klang River into a maritime economic zone for the state, is expected to rake in more than RM1 billion in investments by 2030, said Menteri Besar Datuk Seri Amirudin Shari. He said the investments would be coming in the form of joint ventures with the state’s special purpose vehicles. Amirudin said SMG had a lot of potential, and to-date the Selangor government had spent about RM45 million for the cleanup of the Klang River. “We are currently in negotiations with several parties to realise a number of activities to propel the revival of the river,” he said. Four key pillars — river cleaning, river connectivity, river development and rehabilitation — had been identified as key drivers within SMG. “All these projects are targeted for completion by 2030, which is in line with the state’s Smart Selangor aspiration in making Selangor Southeast Asia’s leading liveable smart city,” he said. (Malay Mail)

PERAK MB: STATE GOVT TO OFFER HOUSES TO THOSE NOT ELIGIBLE FOR BANK LOANS
Perak Mentri Besar Datuk Saarani Mohamad today announced that the state is offering houses to those with minimum fixed income, but at the same time not eligible to get a housing loan. He said three entities including Perak Foundation, Syarikat Perumahan Negara Bhd (SPNB) and Perak Malay Contractors Association Malaysia (PKMM) will carry out the housing project under the Rumah Perakku Prihatin scheme. The state will give RM10 million to Perak Foundation and they will find the eligible applicants. The applicants should be between the B40 group and those with a fixed income group, but not entitled to free home aid or bank housing loan. Saarani said that the individuals in the identified group can apply for housing loaning without interest via Perak Foundation. More than 200 units of houses can be built under the “Rumah Perakku Prihatin” scheme with the RM10 million given to the Perak Foundation. (Malay Mail)