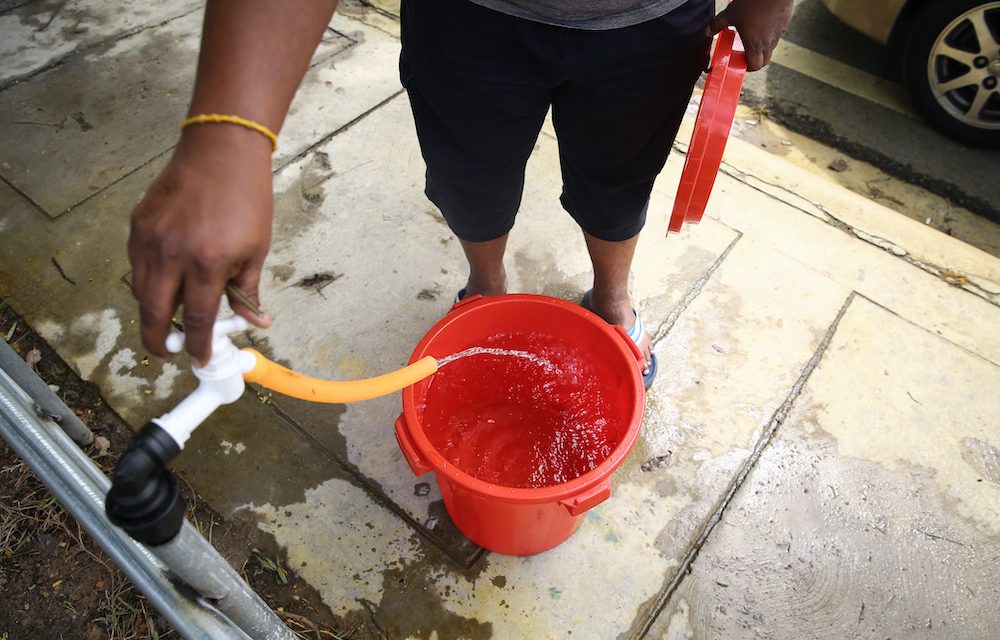 PLANNED WATER CUTS IN KLANG VALLEY IN LATE MARCH, EARLY APRIL
Residents and business proprietors in the Petaling and Klang districts as well as Shah Alam municipality have been asked to prepare for two days of water disruption starting March 30.The disruption – scheduled to take place from 9am to 9pm daily – would affect five areas in Petaling, 14 in Klang and 11 in Shah Alam, said Air Selangor. It said the disruption was to facilitate work to remove and replace an old pipe in Persiaran Selangor Section 15 in Shah Alam. It also announced a planned disruption in 12 areas in the Gombak district and 46 areas in Kuala Lumpur starting April 6. The disruption, scheduled to last 68 hours from 9am to 9pm daily, is to facilitate replacement of a valve for raw water from the Klang Gates dam. Separately, it added that it was planning to conduct maintenance of its main assets at a few of its treatment plants. “However, these scheduled works are subject to approval from the National Water Services Commission (SPAN). Air Selangor will provide the lists of areas to be involved and the supply resumption times after we obtain approval from SPAN,” it said. (The Star)

KHAIRY: MALAYSIA, SINGAPORE TO USE BLOCKCHAIN TECHNOLOGY FOR VACCINATION CERTIFICATES
Both Malaysia and Singapore’s digital vaccination certificates are secured by blockchain technology and come with a traceability feature that tells the exact batch of the vaccine vial used for inoculation. “The interoperability between the digital certification systems used in both countries will be crucial especially when taking into account standards set by World Health Organisation (WHO), International Air Transport Association (IATA) and other countries,” he said. During the meeting with Singapore Foreign Minister Dr Vivian Balakrishnan, both discussed their respective national immunisation plans and the exchange of best practices, and opening up the borders with health certificates recognised by both nations. Malaysia and Singapore are also committed in becoming a working model of post-pandemic recovery. (Malay Mail)

REFER TO NATIONAL SECURITY COUNCIL WEBSITE FOR LATEST COVID-19 SOP, SAYS IGP
The Royal Malaysia Police (PDRM) has reminded the public to refer to the National Security Council (MKN) official website to obtain the latest Covid-19 standard operating procedures (SOP) on social events or programmes such as talks, courses and others throughout the pandemic period. Inspector-General of Police Tan Sri Abdul Hamid Bador said the SOP differs according to the types of movement control enforced in each state namely recovery, conditional and enhanced. “The focus is on the aspect of physical distancing and the size of the premises,” he said. He also reminded the public to scan the QR code on the MySejahtera application or record their name and contact number in the notebook provided. “For temperature check, it only needs to be done once if it is in the same premises or building such as the shopping complex,” he said. Abdul Hamid said PDRM would continue to conduct operations to ensure compliance with the SOP, in efforts to flatten the Covid-19 curve. (The Edge)

MALAYSIANS MOVE AWAY FROM AUSTRALIA TO BUY SINGAPORE REAL ESTATE
Cross-border property buying is evolving rapidly among Malaysians and they are dumping Australia for Singapore as they gain wealth, says Juwai IQI. The firm’s co-founder and CEO Kashif Ansari said that Singapore has become the prefered destination for home buying as compared to Australia in the past. Kashif believes that this could be due to the Covid-19 pandemic which shook up property buyers and changed their preferences. He said the border closures and travel restrictions have made Singapore a more-popular destination because of its proximity and stability. Official data from Singapore’s Urban Redevelopment Authority reveals that Malaysians are the second most-active foreign buyers of non-landed private homes in Singapore. Non-landed private home purchases by Malaysians climbed quickly in the second half of 2020. Foreigners can only buy condominiums and apartments as Singapore imposes foreign ownership restrictions on landed residential properties. Kashif pointed out that Malaysian buyers pushed Singapore from third to first place in 2020, while Australia dropped from first to second place, and the United States dropped from the second rank to third. (NST Online)

KING: CITY DEVELOPMENT POLICY NEEDS RESILIENCE STRATEGY FRAMEWORK
Yang di-Pertuan Agong Al-Sultan Abdullah Ri’ayatuddin Al-Mustafa Billah Shah said city development practices and policies nationwide need to encompass new strategies with an emphasis on vigilance and resilience. His Majesty said the move was necessary for facing future challenges, whether natural disasters or economic crises or pandemics. “Therefore, cities in Malaysia must have a high level of resilience to face any eventuality,” he said. To achieve such a goal, it was only appropriate for the government to focus on improving the quality of the environment, formulate sustainable population density management strategies and emphasise dynamic urban management through integration between all agencies. He added that the use of smart technology is also able to provide continuity to critical infrastructure in the face of disasters and crises. His Majesty also welcomed the government’s efforts to draw up a new structural plan for the city of Kuala Lumpur, with a vision to make the capital a ‘City for All’. (The Edge)

PROPERTY DEVELOPER YONG TAI EXPANDS INTO GOLD MINING BUSINESS
Property developer Yong Tai Bhd’s subsidiary has been appointed the exclusive mining operator to undertake exploration works on a 100ha site in Bukit Kenderak in Pahang’s Lipis district. Yong Tai CEO Datuk Wira Boo Kuang Loon said that the group’s appointment is a golden opportunity for it to diversify away from its property development and tourism business, which has been severely affected by the Covid-19 pandemic. Yong Tai said the mining area was in operation over the last five years with proven gold mined, giving a better exploration database and detailed geological models, which translated into reduced risks and huge discount on capital costs. The mining agreement is valid until May 11, 2025 for the initial term and the group could apply for an extension of the mining lease for an additional period of five years if the gold deposits in the land are not exhausted. (The Edge)