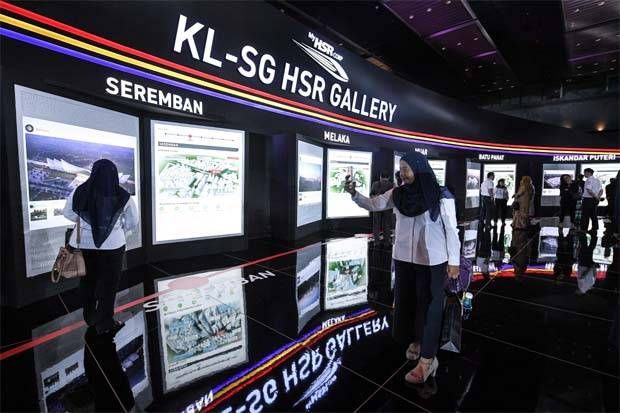 HSR: MALAYSIA PAYS RM320MIL AS COMPENSATION TO SINGAPORE
Malaysia has paid SG$102.8 million (RM320.27 million) to Singapore for costs incurred for the development of the Kuala Lumpur-Singapore High-Speed Rail (HSR) project, and in relation to the extension of its suspension. The two countries reached an amicable agreement on the amount following a verification process by the Malaysian government. This amount represents a full and final settlement in relation to the termination of the Bilateral Agreement on the HSR project on Dec 31, 2020, Malaysia’s Minister in the Prime Minister’s Department (Economy) and Singapore’s Minister for Transport said in a joint statement here, today. Both countries remain committed to maintaining good relations and fostering close cooperation for the mutual benefit of the peoples of the two countries, the statement said. (The Star)

PENANG’S PAN ISLAND LINK TO BE BUILT IN PHASES, SECOND HIGHWAY ALREADY IN PIPELINE
Penang will construct the Pan Island Link 1 (PIL1) in phases starting with a 2.4km stretch in Bayan Baru, said state exco Zairil Khir Johari. The infrastructure and transport committee chairman said the first phase of the PIL1 is to connect Jalan Tun Dr Awang to Lebuhraya Tun Dr Lim Chong Eu at the Free Industrial Zone (FIZ) 4. He said the overall length for PIL1 was 19.5km and will link Gurney Drive to the FIZ 4 area. “The environmental impact assessment (EIA) approval was further extended for another two years to April 10 of 2022,” he said. The state government has also planned for a Pan Island Link 2A (PIL2A), which is the main link between the reclaimed islands of Penang South Reclamation (PSR) and the main island, he said. He said Island A of the PSR project will take between six and nine years to be fully reclaimed, and the reclaimed land will then be sold to fund the state’s Penang Transport Master Plan (PTMP). The PSR is yet to be started as the state is still awaiting Environmental Management Plan (EMP) approval. (Malay Mail)

PERAK LAUNCHES 2030 DEVELOPMENT BLUEPRINT TO CUT POVERTY IN STATE
Perak has launched its 2030 State Development Plan Roadmap, with the aim of reducing the state’s number B40 households that was the highest in the country at 12.7%. Perak Mentri Besar Datuk Saarani Mohamad argued, however, that Perak’s high proportion of B40 was due to the revision of the poverty line income nationally. He said that the state government will look into the aspects of social poverty caused by the education gap among the people. Saarani also said income inequality between urban and rural communities remained a challenge that needed proactive government action, aside from being a major constraint for the B40 group to buy their own homes. To ensure that housing development can be done comprehensively, Saarani said the state government has improved the Perak State Housing Policy (DPNP). “Currently, the government is targeting to build 50,000 units of affordable houses within the five years until 2023 which will be jointly done by federal government agencies, state governments and private sectors,” he said. (Malay Mail)

PRIVATE HOSPITALS MAY GET APPROVAL FOR VACCINE PROCUREMENT
Private hospitals will be given permission to negotiate with suppliers to purchase Covid-19 vaccines, says National Covid-19 Immunisation Programme Coordinating Minister Khairy Jamaluddin. But being personally involved in discussions with vaccine providers, he said, vaccine delivery to private markets will most likely be made in the third and fourth quarter of this year, at the earliest. “I will let them try to procure but to manage the expectations of Malaysians, I can tell you the private market will not immediately give them,” he said. On the vaccination registration deadline, Khairy said the government is still discussing whether it is suitable and when the date can be announced. “If we decide that the suggestion can bring a positive outcome to the number of vaccinations, we will announce it later,” he added. Meanwhile, Khairy has discussed with the National Security Council, Home, International Trade and Industry and Foreign ministries on vaccination for foreigners in the country, including embassy staff, foreign students as well as legal and undocumented migrants. (The Star)

LBS BINA GROUP FOUNDER PASSES AWAY
LBS Bina Group Bhd founder and former chairman Datuk Seri Lim Bock Seng has passed away. The property developer announced the passing of its former chairman yesterday in a statement, while extending its condolences to Bock Seng’s family in their bereavement and expressing its enduring gratitude for his decades of leadership and inspiration. Bock Seng, 90, had been chairman of LBS since Dec 6,2001, until his retirement from the position on March 1,2021. LBS Bina executive chairman Tan Sri Lim Hock San said in a statement that the company is deeply saddened by the loss of its founder Bock Seng, who was also Hock San’s father. (The Star)